For this tutorial we will use ORBIT SB9 test bed to execute a test with two types of supported flows (stream and command flows) on test topology shown on image below. 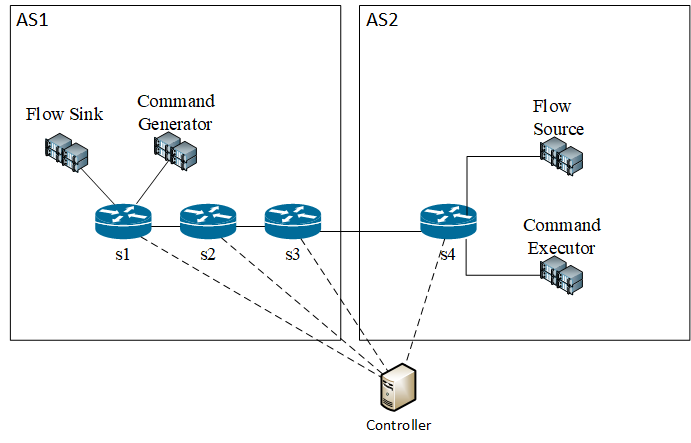 Environment setup, test execution and results collecting is covered in this tutorial.

VM that will be used in ORBIT environment should be pre-configured and we suggest using Ubuntu 14.04. There are two approaches for running the SG network emulation:

Following items should be installed and configured:

VM that can be used as base and is already available at ORBIT catalog is ubuntu-14-04-64bit-2017-06-09.ndz. These steps can be simplified if prepared VM is saved and reused.

Use already prepared VM that should be the quickest way. The VM is named sg-comm-emulation.ndz.

Setting up the environment

Setting up the environment is mostly automated. First, time slot at ORBIT should be scheduled. This is explained ​Getting Started Wiki page. Once the registrations has been approved via email, prepared VM can be loaded onto the SB9 test bed and the machines can be started. Ubuntu 14.04 VM image is available at ORBIT VM catalog.

Once the VM image has been loaded and the nodes are up and running, the only thing left is to exchange ssh authorization keys. This is done by executing following script ~/emulator/environment//setup_ssh.sh ~/nodes. Provided nodes file contains the list of ORBIT nodes that are up and running and will be used for running mininet nodes. File is provided in attached archive.

Results are grouped by node name and there are two types of results:

Note: See TracWiki for help on using the wiki.